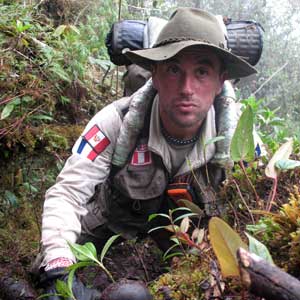 In September 2006, Jamin made official the discovery of new petroglyphs (figures engraved in the rock) on the archaeological site of Pusharo and the first Amazonian geoglyphs (giant figures engraved on the ground), never reported before in the Amazon rainforest.

In the fall of 2010, he revealed to the Peruvian Ministry of Culture the existence of around thirty archaeological sites hitherto unknown to modern archeology, discovered by his team in the valleys of Lacco – Yavero and Chunchusmayo, in the department of Cusco.

His 2011 research campaign, in the National Sanctuary of Megantoni, allowed him to accumulate new indications on the existence and the localization of a large population center, not far from there…

The important discoveries made by Thierry Jamin and his group in Machu Picchu between 2011 and 2014 and the studies carried out between 2016 and 2021 (these studies are still continuing) on mysterious non-human mummies, found in 2015 in the Nasca desert by huaqueros, have been the subject of recent publications. Professional archaeologist with a long experience in research, Domingo Farfán has also collaborated with Thierry Jamin and his group for more than ten years. In May 2019, he finally joined the Inkarri Institute as Executive Secretary. Young general practitioner, Martín is the “Speaker” of the institute. His work is very useful for our team in the organization and the conduct of our research campaigns in difficult terrain and within the framework of the social programs developed by our NGO with populations living in our research areas. José was a member of a special intervention unit of the Peruvian National Police (PNP). A specialist in the fight against terrorism in the 1980s, he fought for fifteen years against the Shining Path. He joined Thierry Jamin’s team in May 2009, then founded the Inkarri Institute with him. Vice-president of the Institute, José is in charge, during research campaigns, of the coordination, organization and proper functioning of the base camps. After more than ten years of a rich collaboration with Thierry and his group, Hilbert Sumire, professional archaeologist (R.N.A. N° BS-0855) and tourist guide, joined the Inkarri Institute in 2019, as Secretary of Acts (Ver su Currículum Vitae). Collaborator of Thierry Jamin in his research for more than ten years, Ernesto joined the Inkarri Institute in May 2019 as Treasurer. In 2017, it was Ernesto who discovered the existence of fingerprints on the fingers of the mysterious three-toed mummy called “Maria”. Secretary for Public Relations and Information, Edward is responsible, in Cusco, for the audiovisual production company Neviza TV (www.nevizatv.com). Since 2009, he is the official cameraman of the expeditions of Thierry Jamin and the Inkarri group. A calm, all-terrain man! A true professional!